As I remember it, my lifelong love of pop music began in the formal living room of my house sometime around my seventh birthday.

I am the youngest of four siblings. The youngest of my siblings is 8 1/2 years older than I am, so when we were young the age gap often created tension and arguing in our household. I couldn’t stand being the youngest and always felt left out of everything my brothers and sister were doing. They were all near the same age and, in my eyes, had unlimited freedom and access to the world that I could only dream of.

As it happened, one day the family was in the front living room of the house. One of my siblings – my sister I believe — had come into several 45’s of current popular songs. I felt left out because I didn’t have any new records, so I begged to have one of those. My father finally told her to give me one, probably so that he wouldn’t have to listen to me anymore. Reluctantly, she handed me Wings’ “Silly Love Songs” to have as my own. I didn’t know anything about Paul McCartney or Wings, of course. The only records I had at that time for my little plastic yellow record player were Sesame Street and Kermit the Frog (“It’s Not Easy Being Green”). I played these two records all the time.

I began listening to “Silly Love Songs” on a regular basis. I believe I wondered what a “silly love song” was, and why it was silly. As I remember it, I thought the song was OK, but nothing special. I liked the B side, “Cook of the House” a little better.  It was a more upbeat tune that I rather enjoyed.

As a side note, it was only just now, as I went back and listened to the song on YouTube, that I realized it was Linda McCartney singing the lead vocals on “Cook of the House” and not Paul. All these years I had believed it was him.

Young children are particularly impressionable, and I was no exception. My venture into pop music began a lifelong love for music in general, but pop and rock in particular.

Besides Paul McCartney and Wings, my sister had many other 45’s. I don’t remember most of them, but The Sylvers’ “High School Dance” was one tune I remember she played quite a bit. The face of the 45 RPM disc had a peculiar look to it. The grooves containing the music had been cut in such a way that when the record spun, a swirl pattern moved outward from the center where the hole was. 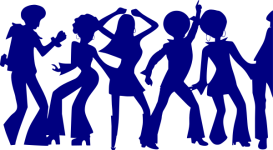 My youngest brother was a fan of all things disco, as well as just about any female vocalist, disco or not. From him I developed my lifelong love of disco. I have always loved Donna Summer, Sister Sledge, and Diana Ross. The Bee Gees and Chic were among his short list of favorite artists featuring male vocalists. I looked up to him and consequently adopted his love of these artists.

To this day, any music that was popular and ruled the airwaves during those early years of my life seems so much more “grown up” and mature than anything that followed it. As a 6-10-year- old who idolized his older siblings and listened to their music, no matter how old I have become that same music always transforms me into someone wiser, older, bigger, more mature. Donna Summer and KC & the Sunshine Band knew and understood the essence of life. Their songs and their lyrics cut to the bone, they taught me, schooled me on how I was supposed to face life. I learned how to act and react, how love was supposed to feel and not feel, showed me what a grown-up does, what a grown-up believes.

These artists were so much older than I was — they had the life experience that I didn’t yet have. Life was tough, they said, but life can be good. Live — live for love, live for fun, live for freedom and autonomy. Throw in healthy portions of love and sex, along with a dash (or more) of alcohol. Life will hurt, but you’ll be just fine in the end. They did it, they wrote about it, they sang it. I can do the same, albeit without the fame and fortune. Saturday Night Fever was the life. Those in the know danced like John Travolta, sang like Donna Summer, and looked like Barry Gibb and Amii Stewart.

Even though I’m much older now, the music I was exposed to in my childhood has a powerful impact on me. I’m sure it will always be a part of me, no matter how old I am. I’ll probably be 75 years old and if I happen to hear “Hot Stuff” I’ll start to groove a little, even if just on the inside.