Have you ever heard the saying, “Fake it till you make it”?

Simply put, it refers to acting a certain way until you actually begin to feel that way. Motivational speakers often explain the power of this life hack to crowds of business or sales professionals.

However, you can use it in your everyday life as well. If you want to feel more confident when you’re at a party or get-together, for example, just act like you are a confident, relaxed person. Walk into the room with your head held high and a walk that says you know what you want out of life.

One of the most important parts of this technique is your facial expression.

Did you know that you can actually trick your mind into thinking you feel a certain way? Normally, we look at things the other way around—whatever emotion we feel or think about (joy, sadness, anger, etc.) is consequently displayed on our face (using our eyes and mouth).

But, the opposite is also true. If we put a big smile on our face, we can’t help but feel better. That’s right, smile really big and see if you don’t feel happier. You can actually change your mood instantly just by changing your facial expression. 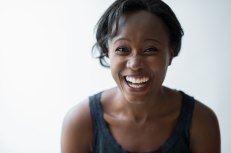 That’s what I like to call “Paint Your Face How You Want to Feel,” or PYFHYWTF. If you want to feel joyful, put a big grin on your face. If you want to feel calm and relaxed, smile serenely and narrow your eyes a bit like you’re basking in the breeze on a warm beach and almost ready to doze off.

The effect is even more powerful if you do this while looking in a mirror.

There is an abundance of science behind why smiling makes us feel better. When our smile muscles contract to form a smile, they fire a signal back to the brain to stimulate the production of endorphins, dopamine, and serotonin that make us feel happier.

And when we’re happier, we smile more. It’s a positive reward cycle that can be set into motion just by smiling.

Imagine yourself as being happy and the feelings will follow.

Psychology Today has several online articles about the positive aspects of smiling—here and here are just two of them. The British Council even recommends holding a pencil between our teeth to exercise our smile muscles.

Not that you’d necessarily ever want to feel angry, but if you did, you could make yourself feel that emotion just by creating and angry expression.

That’s why when something small bothers you and you start to show it on your face, the emotions involved can quickly escalate. Before you know it, you’re full of rage over something insignificant.

You have much more power over your emotions than you might have realized.

Go on, give it a try. Stand in front of a mirror and give yourself your best smile and see what happens.

Some days life seems really good and then other days it really stinks. I can’t say certainty why I feel differently about life at different times. One interesting thing I have noticed, however, is that in the mornings when I get out of my car to walk into work, the way I feel physically will usually be mirrored by my emotional state.

For example, If I feel well-rested, without too many aches and pains in my middle-aged body, not only will I walk at a brisker pace, I’ll also feel more optimistic about the day. I may even look forward to greeting my coworkers. On the other hand, if I feel like death warmed over, I’ll  sort of stumble across the street toward the door, maybe even in a weary, zigzag manner. The thought of being cheery that early in the morning nauseates me. I just want to be left alone.

So, instead of asking myself, Which came first, the chicken or the egg?, I’m asking myself, Which comes first, physical energy (or the lack thereof) or emotions?. I believe the answer lies somewhere in between. I think one of these can both influence and reinforce the other. How then, do I break the cycle if I’m down in the dumps emotionally, AND feel exhausted and weak physically?

I have learned from various readings and seminars, that it’s possible to lift the emotions by making small physical adjustments. I know from my own personal experience that simply softening my face slightly with the smallest of smiles, causes my outlook on life to brighten immediately; everything seems better. Sitting up a tad straighter in my chair and tilting my head up slightly as if peering into the distance will also positively affect my emotions. If this seems simple, it really is. As superficial as it may appear, complex mechanisms are at work here. There is science behind this to be sure, but the processes taking place when you smile are not clearly understood yet.

In recent years several studies have been conducted that have largely come to the conclusion that your facial expressions can have a significant impact on your emotions. One study in particular that I found very interesting involved individuals whose frown muscles had been weakened or damaged by Botox; they were unable to frown. On the whole, these people reported feeling happier than individuals who had not received Botox. Interestingly, the Botox recipients also reported that they felt no more attractive than they did before Botox, thus helping eliminate the possibility of optimistic feelings based on supposed better looks. The conclusion of the study was that being unable to produce a frown kept these people in a happier mood. Other studies have made similar conclusions.

So, if you find yourself in a dreadful situation and you put on a smile to help your mood and outlook, is this a fake smile – one that denies the awfulness of the situation at hand? Or are you shrewdly altering your emotions through an intentional physical manipulation?

These questions are hotly debated for sure. In the past, I rested firmly in the camp that smiley people were simply stupid. They were ignorant of their environment and the world around them. Obviously they had not made any real attempt to look at the seriousness of life. If they could blindly smile and laugh in the face of so many critical issues and decisions to be made on a daily basis, then I wanted nothing to do with them.

Somewhere along the line, however, my opinion on the smile issue changed. Most likely it was due to numerous self-improvement teachings I encountered as I matured into adulthood. Certainly I have wavered back and forth in my beliefs over the last 20+ years, but deep down my core belief is that the world is as you make it. Smile and the world smiles with you, as the old saying goes. Two people can encounter the same negative situation with polar opposite reactions. The person who is positive and optimistic will be poised to move forward with a solution to the problem. The negative person will remain stuck, either in the present, the past, or both, asking himself, Why me?.

I can make this statement because I’ve spent a lot of time at both poles in my life, though mostly the negative pole. At this moment I’m approaching problems (challenges!) from a positive perspective, putting on a smile and looking at the world around me optimistically. Not long ago, however, I sat daily on my stump of criticism, cursing the “beautiful” people who seemingly had more stuff than I did.

I’m sure I’m not done being negative; the depression I battle often knocks me off the tightrope on which I try to balance my emotions. The only thing I can really do is to keep working on myself on a daily basis. That’s all any of us can do.