Recently I was chatting with an acquaintance of mine. He is one of those guys who has a lot of friends. Countless times I’ve heard him mention something about “this buddy of mine”.

My acquaintance (I’ll call him Bob for simplicity) and I were talking about divorce, as he went through a divorce recently and has a young daughter. We had been discussing child support in terms of the mandatory court-ordered kind, but our conversation had drifted more into supporting a child in general.

Bob mentioned something to the effect that a child is the gift that keeps on giving — meaning not something positive, but in the negative sense in that it is something you have to keep paying for. “I’ve only got 8 more years though, and then that’s it,” implying that his financial obligation would be over when his daughter turns 18. To be fair, I’m not sure if he merely meant the monthly child support payment he makes, but it came across to me that he meant his entire obligation would end at that time.

As if that weren’t bad enough, a few moments later in the conversation Bob referenced “one of my buddies who got this ol’ girl knocked up.” He said, “I told him not to marry her just because you got her pregnant. Just look at it as another payment.”

Of course, Bob was talking about the assumed child support payment the father would take on.

How can you look at a child as “just another payment”. Certainly, the father should take financial responsibility for the child, ensuring that his or her needs are adequately met (not to mention those of the mother).  However, true responsibility for the child goes far beyond buying diapers, clothes, or school supplies. Children need a father just as much as they need a mother.

According to statistics recently released by the Centers for Disease Control and Prevention , almost 41% of all births in 2012 were by unwed mothers. More shocking, at least to me anyway, is the statistic from the U.S. Census Bureau that 62 percent of women aged 20-24 who gave birth in 2011 were unmarried.

These figures are hard to digest. No wonder kids these days are suffering — emotionally, intellectually, mentally, and physically.

I realize many people in the world believe that it is old-fashioned to insist that a child be reared with one mother and one father, especially given today’s wide range of acceptance for what is termed a “normal” family.

I hate to say it, but as long as our culture believes it is acceptable to ignore God’s plan for the family, we will all continue to suffer.  He defines what a family should be in many places throughout the Bible.

Genesis 2:24 says, “Therefore a man shall leave his father and his mother and hold fast to his wife, and they shall become one flesh.”

Mark 10: 9 expands  on the idea of husband and wife remaining together: “What therefore God has joined together, let not man separate.”

I’m not naive. Certainly, I understand that there are unavoidable circumstances where children cannot have both parents — a married male and a female — to raise them. I have all the compassion and sympathy in the world for single moms (and dads), and I know quite a few of them. I also realize that children are capable of thriving in a less-than-ideal environment. But why put our kids at risk for a lifetime of struggle and hardship if it’s not necessary?

Summing up my argument, as much as it is possible we should strive to create the ideal type of home as God set forth for us — a matched set of married parents living together with their children (and, of course, a chocolate lab). 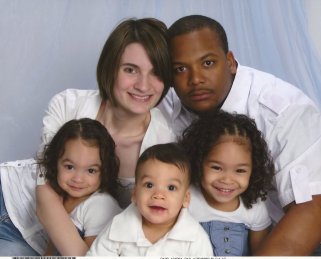